The name garnet comes from Latin 'granatus' or pomegranate. Garnet comes in many colors. The red garnet is the most common color worldwide.

Garnet in all kind of colors

The beautiful garnet family is an extensive group of gemstones with different colors. There are more than 20 types of garnets and about 5 are the most well known. Some garnet are rare such as the blue or the purple garnet. The red, raspberry pink and yellow are the more commons pieces.

The almandine garnet is the purple to orange-red garnet. This garnet owes its name to the place Alabanda in Turkey. It was the place where Pliny the Elder talked about the red garnet. Almandine is the most common garnet.

Hessonite is the cinnamon colored variant. The name is derived from Greek and means Inferior. Despite this name, the hessonite has a beautiful warm orange-brown color.

Tsavorite grenade, the beautiful variant is a valuable grenade. The green garnet tsavorite was in 1960 found for the first time. Tsavorite often occurs in smaller stones.

Demantoid garnet, and we are talking now about the one found in Russia, is a special stone. The demantoid has a light to dark green color and is sometimes also yellow green. In some demantoid garnets you will find the so-called horsetail inclusion. A very small horsetail enclosed in a stone. This only occurs in the demantoid from Russia.

For the ancient Egyptians, the garnet was primarily a symbol of life. But the red garnet also helps you to ground. This is really helpful if you're too much in your head. And in the early days friends gave each other a red garnet, as a token and promise that they would meet again.

The garnet belongs to the base or root chakra. It is the chakra that provides safety and security.

Garnet and the zodiac signs

The beautiful garnet suits different zodiac signs such as Aries, Leo and Scorpio.

Garnet is the January birthstone.

Meaning of the garnet

Garnet is the stone of prosperity and abundance.

Are you looking for a piece of jewelry with a garnet? Then view the collection of Kiliaan Jewelry. 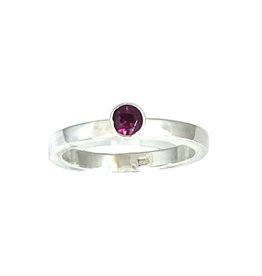 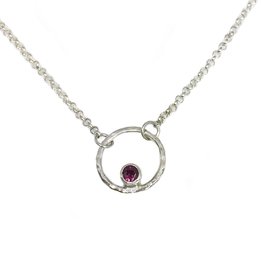 A short spiritual silver necklace with a Circle of Life pendant and a lovely rhodolite. Length necklace 39,5 cm, with an extension chain of 5 cm.
Add to cart
Necklace Circle of Life rhodolite €55,00 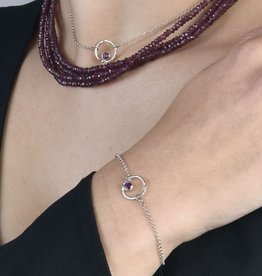 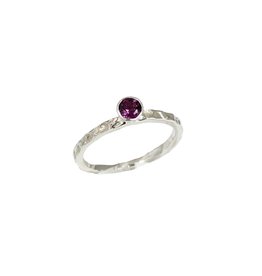 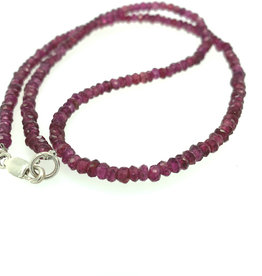 Sterling silver stud earrings Daisy with peridot. Also available with blue topaz and rhodolite.
Add to cart
Stud earring Daisy, garnet €45,00
By using our website, you agree to the usage of cookies to help us make this website better. Hide this message More on cookies »