Amazonite is a green/blue variety of the feldspar and has been used for centuries as a gemstone.
Although the stone is said to be named after the Amazon River it strangely enough is never found there.

Thousands years before the discovery of South America, amazonite was already known in the Ancient World by the Egyptians for various adornments.
Amazonite is found at different locations like Russia, Colorado USA, Canada, Mexico and Madagascar, to name a few countries.

Amazonithe can be used for the chakra's: fourth (heart) and fifth (throat).

The amazonite is part of the Feldspar group like the other variaties moonstone, labradorite and sunstone. The stone has a hardness of 6 -6,5 (Mohs) and can be used in jewelry. Visit the web boutique Kiliaan Jewelry for amazonite jewelry. 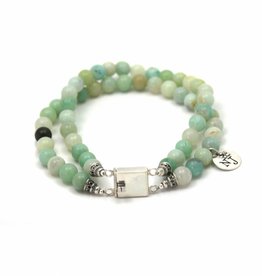 Amazonite bracelet, two rows with sterling silver details.
Add to cart
Bracelet Amazonite
€125,00
€95,00
By using our website, you agree to the usage of cookies to help us make this website better. Hide this message More on cookies »